For decades, people of all backgrounds have sought to break through what they consider a "glass ceiling" to live up to their full potential at work. Often referring to the struggle for highly qualified women to break through an invisible, unspoken barrier and achieve the highest echelon of executive leadership, the question is what gets in the way.

There are multiple reasons that quality candidates aren't promoted when they should be. While this glass ceiling may be in response to socially held prejudices and misconceptions (relating to gender, race, sexuality, and background), the basic obstacle that stands in the way of the promotion of many to senior and executive positions is simply the culture of power that permeates the highest levels of business leadership. 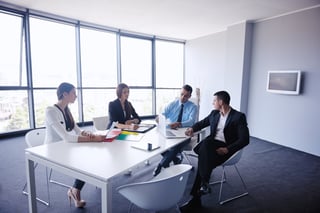 Merit-Based Promotion – To a Point

In an ideal world, we assume that hard work and becoming an indispensable part of the organization should be a surefire way to climb the executive ladder until you reach your peak—with nothing standing in your way, save for your own limitations. In reality, in most organizations, promotions are based upon merit…until you reach a certain level.

What often happens is that a person is hired and rises in the organization until he/she reaches a ceiling at the senior levels of the company. Once there, things can come to a grinding halt. The reason for this sudden stop may not be immediately clear—but the impact on your career trajectory is plain as day.

The reason that you hit that ceiling at the executive level involves the fact that the "rules" relating to promotion suddenly change. It's no longer simply about how qualified or deserving of the promotion you are. The fact is: you have risen as far as you can go simply by jumping through the hoops you have focused on prior to this point.

“As he or she crosses the invisible barrier, the rules change,” wrote Adrian Savage, President of NVA, Inc. “Indeed, those above the barrier, who operated by these new rules, generally see them as so important that they may use them to prevent an otherwise admirable high flier from crossing the barrier at all. …If you aren’t judged as a person likely to work well with the new rules you won’t get across the barrier. If you cross, then fail to change, you’ll be sent back or ejected from the organization altogether.”

The reason for this ceiling is that, rather than being just merit-based, your worthiness is judged by how well you may fit with the executive power culture. This, as Abraham Zaleznik, Professor of Leadership Emeritus at Harvard Business School, writes is because all organizations are "political structures." Specifically, he talks about how organizations of all kinds are "political pyramids": starting at a base level, there is ample opportunity to accumulate power, yet as you move up the pyramid, executive power grows scarcer.

"A political pyramid exists when people compete for power in an economy of scarcity," Zaleznik wrote. "In other words, people cannot get the power they want just for the asking."

Another unfortunate aspect of the glass ceiling is that, for those in the executive power suite, it is also a floor. This means that, while employees on the ascent may be seeing opportunity just above them, executives at the top rarely have occasion to recognize or interact with those below them. This is key to what Jack Zenger, Co-Founder and Chief Executive Officer of Zenger Folkman, calls the "Executive Wall," itself another aspect of the glass ceiling.

"As leaders move up in an organization, the emotional connection with co-workers is often diluted and easily lost as the span of control increases and the frequency of interaction is cut back," Zenger said. "Work changes from being meaningful interactions with customers and colleagues and becomes represented as numbers on a spreadsheet."

Breaking Through the Ceiling

When you find yourself at the threshold of executive leadership, simply asking for entree, as Zaleznik points out, isn't going to be enough. Similarly, those contemplating your promotion are unlikely to grant you the opportunity if you are just a number to them—even if those numbers are attractive in regard to productivity, lower costs, or other metrics.

So how do you break through this glass ceiling? The key is a combination of strategies:

Take a look at the executive culture at your organization. What are the features of those you see at the top? Is there a way they communicate amongst themselves or others? Are there mentors in the organization that may see your potential and will provide guidance? Before presenting to the executive level, can you gain understanding of the unwritten rules at that level by talking to people who have gone before you? Do you have a sponsor than can help describe the politics of everyone in the meeting or is willing to provide feedback during a rehearsal?

There is no aspect of that culture too granular to consider. The goal is to identify the features of this executive culture. By seeking understanding and learning these unwritten rules, you can more easily make a strong, positive impression. What is critical is to understand the politics of power.

Going off what Zenger is referring to, try and make yourself known to executives as much as is appropriate and possible. Socialize where you can, speaking to them with a mixture of respect for their position and self-confidence. Make yourself seem more like a peer than a number on a spreadsheet.

Combining the knowledge of how the executive culture at your specific organization is set up with general lessons for communicating in a more impactful way, you may make a crack in the glass ceiling to executive leadership.