Coming soon, PowerSpeaking will be releasing its latest eBook "Narrative Evidence: Bringing Your Data to Life with Storytelling." The eBook is designed to act as an introduction for subject-matter experts to the importance of constructing a compelling, engaging narrative to aid in presentations. In anticipation of the eBook's release, we wanted to explore one of the central concepts of both the eBook and our HighTechSpeaking® program: the value of narrative evidence to support the value of anecdotal evidence to provide greater understanding and meaning of dense data. 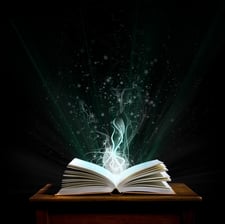 To start, let's define our terms: Analytical evidence is facts and figures. It is typically collected by scientific, systematic means and thoroughly validated by broader research. Quantifiable data related to trends, patterns, habits and behaviors are all prime examples of analytical evidence and can also be used — with significant statistical accuracy — to predict future behavior. This makes analytical evidence typically universal, at least scientifically.

Narrative evidence, on the other hand, is much smaller in scope and more narrowly focused — yet, for many, it carries immense weight. It tells a story and can be tied to something one person — usually the narrator or presenter — experienced in their life. Examples include a doctor discussing a sick patient, a store manager reading the letter of a satisfied customer. It may not be universal (it did only happen to one person), but often Narrative evidence feels compelling in a way that analytical evidence doesn't.

Why We Love a Narrative

When you're dealing with a deeply scientific, well-researched topic, it may feel like narrative evidence doesn't have a place. Within the scientific community, it can be deeply controversial: If the evidence isn't universal, why even mention it?

Narratives have power over us because the facts alone are not always the full picture. Think about how many times you’ve heard a person say something clearly, but you just can’t make sense of what they said. Even if you understood every individual word, the meaning of it all together may have been lost on you.

“Science, by its own definition, doesn’t give us meaning,” says interfaith speaker and Benedictine monk David Steindl-Rast. “It just provides us with facts . . . Our lives gain meaning only when we tell our story. What the various religious traditions have done over the millennia is to tell the (universe's) story.”

Emotion and the Construction of Narrative

The reason for using narratives evidence is the same reason many in the scientific community are wary of it: It has powerful ties to emotion and the way we construct believable narratives. Analytical evidence, even amongst experts, can sometimes feel remote and uninspiring. It's difficult to understand how all these greater societal or population trends ties in your life. If someone tells you a story that happened to them, on the other hand, it's much easier to see yourself in the narrative — making it key to crafting a compelling presentation.

What We Prefer to Be True

Many blame over-reliance on anecdotal evidence for current cultural issues with half-truths, fallacies and confirmation bias. As Francis Bacon once said, "Man prefers to believe what he prefers to be true." Everyone against the story can be dismissed as biased.

Human beings are innately skeptical of things they haven't experienced first hand — and considering Shermer's words, for good reason. To overcome it, we have to bridge the gap between remote analytical research and the kind of stories that we find ourselves part of every day.

Supporting the Facts, Not At Odds With Them

The goal in a presentation isn't to use narrative evidence in lieu of analytical evidence — it's to supplement and support the analytical evidence. Take the data-based evidence you are discussing and tie it to something universal. It can be an experience from your life, something that happened to a colleague, friend or family member — or simply an analogy that everyone can comprehend.

Building a strong, universal story with its roots in the everyday is the core of your presentation's Key Point. To learn more about how you can bring your data to life with storytelling, keep an eye out for our upcoming eBook!

How Can Anyone Be A Compelling Storyteller

tom rusert
With the world of business spinning nearly out of orbit, the essence of simple storytelling is as important as kindling to a campfire. Looking forward to the eBook.