Techniques from the Stage: Actors' Advice to Presenters

"All the world's a stage, and all the men and women merely players."

It's one of Shakespeare's most well-known lines, taken from the play As You Like It. While many may or may not have seen the play itself, the words have taken on a life of their own owing to the core truth buried in them: In our everyday lives, we take on roles and put on performances for our peers while trying to make ourselves understood.

Nowhere is this a more apt metaphor than when giving a presentation. You may not be an "actor," but many of the techniques that actors use to convey emotion and captivate audiences can be used to make executive and technical presentations more compelling. Here are few proven acting techniques that can enhance your next presentation: 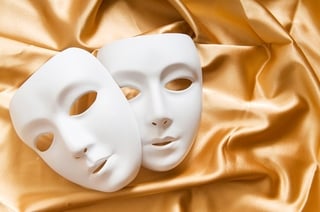 Compelling, talented actors are often described as having "stage presence." It can be hard to pinpoint exactly what amounts to stage presence, but you know it when you see it: That magnetic charisma that draws an audience in and leaves them hanging on every word.

Much of it has to do with being comfortable and natural on the stage. Remember: The presentation starts well before your time in front of the audience. Claim the stage. Tread the boards in the empty auditorium, understanding the dynamics of the space. Visualize a successful presentation and an appreciative audience.

When speaking to Forbes, acting and public speaking coach Kathryn Marie Bild urged presenters to take a tip from actors and approach preparing for a speech as an actor might approach a role. This involves getting to know your "character," i.e., understanding your main objectives and the way that complements the objectives of your audience.

"Who are they—your audience and those who hired you? Why did they ask you to speak? What do they hope to get out of your presentation? What do they hope to do with it?" Bild told Forbes. "Knowing the answers to these questions enables you to predict what you can reasonably expect in the way of reaction."

Non-actors often assume that the amplification provided by microphones and PA systems will be enough to make their voices heard. Professional actors — including ones who use microphones regularly — know better. Even with a microphone that is working perfectly, swallowed or mumbled words will be difficult to understand. Actors are taught to project their voices, so that even when speaking softly or tenderly, there is a resonance that carries past the stage. Practice speaking loudly and clearly, recording yourself and reviewing the tapes to make sure that you have captured every word.

"When I ask the actor or speaker to enunciate his emotions, I am asking him to feel and express his emotions more precisely, to the same end, that I may more clearly understand them," she said. "We, the audience, don't want any what-is-she-feeling ambiguity ... We want to be able to read what the actor is feeling. And we want the same clear emotional and intellectual read of our speakers."

One of the most crucial skills a good actor learns is the ability to read their audience. A presentation — like a play — can be highly rehearsed, but when performed, it is essential that you take cues from your audience. Pause for applause, laughs or gasps, keep yourself facing the crowd at all times and tailor your presentation to this specific crowd and their values.

Taking tips from actors isn't about taking on an affected character and transforming yourself into something unrecognizable — instead, it's about bringing out the power and confidence that is inside you and channeling it into a presentation. Make that stage your own!

Related Blog Posts: Make 'em Laugh: The Use of Humor in Successful Public Speaking, Presenting Emotion-filled Talks with Composure, How Can Anyone Be A Compelling Storyteller