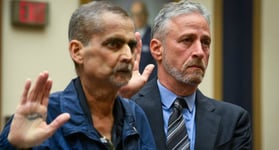 Learning From Passionate Speakers: The Fight for the 9/11 Victim Compensation Fund

Minutes before political commentator Jon Stewart took his seat in front of the House Judiciary Committee to advocate for extending the 9/11 Victim Compensation Fund, 9/11 first responder John Feal took Jon’s prepared script away from him. Feal, who knew Stewart well because of their longtime activism on behalf of 9/11 first responders, had lost part of his left foot working as a demolition supervisor at Ground Zero. In the past 15 years Feal had organized more than 250 trips like this to D.C. to fight for continuing the fund. And here they were again. Feal wanted Stewart to do what he does best: speak from the heart.