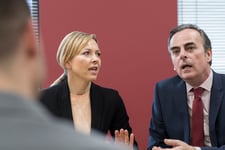 Who Gets Heard—And Why

Immediately after the recent U.S. Democratic debates, newspapers and social media ran commentaries observing how much more often the male candidates, vs. the female, interrupted other panelists and the moderators (especially on the first night). Because of those interruptions, the men commanded much more airtime over the course of the debates. The New York Times, The Atlantic, and Inc. Magazine were just a few media we read that took a closer look at that gender phenomenon. Then there was the Los Angeles Times, which didn’t mince words with this headline: “Democratic debates mirror life: Men yell and interrupt. Women (mostly) wait their turn.”