Want to Win Over an Audience? Forget About Being Perfect. 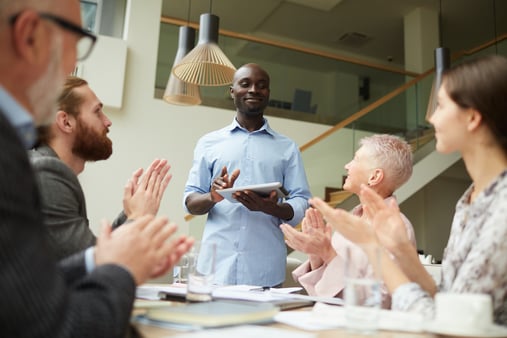 Have you ever spilled coffee all over yourself on purpose? Yeah, me neither. But would you believe that an unintentional fumble like that—or any genuine blunder in front of an audience, really—might just turn out to be a good thing? Stay with me here, because if you suffer from the need to be perfect, I’d like to persuade you to consider “The Pratt Effect,” a phenomenon where people are more likely to warm to you if you’re not perfect.

In a research experiment at the University of California led by Elliot Aronson, results showed that if a person was viewed as highly competent, a mistake increased their likeability. (Mistakes by people viewed as incompetent had the opposite effect.) In the study, a planned “mistake” was committed by a very knowledgeable person who spilled a cup of coffee at the end of an interview. In spite of his oops, this otherwise highly competent person was viewed as more likeable than other interviewees in the study. The thinking was that seemingly “perfect” people were perceived as more distant, unapproachable. Other studies have come to similar conclusions.

Again, it’s not about perfection.

I experienced this firsthand when I joined the PowerSpeaking team. I practiced hard to memorize the workshop content and deliver it with effective style and body language. I wanted to do a perfect job, so I fussed over even minor mistakes. It was really hard work, but here’s the thing: my performance and its effect on the audience were just not as rewarding as I anticipated them to be. My perfectionism was getting in the way. Then, a colleague changed my perspective by suggesting that I allow myself to “Mess up a bit!” What?  You can probably imagine my lack of excitement. My initial thought was “No way!” But learning never stops. When I later learned about the Pratfall Effect, I realized how useful my colleague’s advice was.

Please note that if you are designing spaceships, aircraft, or prescription drugs, a 100% level of accuracy is imperative. For the rest of us, it's not. As studies show, making a mistake can help increase likeability.

Now, I’m not making an argument for doing mediocre or sloppy work. Rather, I’m suggesting you aim for excellence, not perfection. There is a subtle but significant difference between the two. Oftentimes, striving for perfection primarily serves the ego, which means that when you’re presenting, you’re much more focused on yourself than your audience. When you’re all knotted up in your own head, you’re not focusing on giving the audience an experience to remember. Nor are you fully present to engage with them, to really listen to their questions and concerns. Working toward excellence serves the audience—and the greater goal you’re trying to achieve.

In which areas of life and business does this apply to you? Where would you do yourself a favor by risking mistakes in the service of excellence, by not being so afraid to mess up a little? If making presentations or speaking in public is one of those areas where you need to push through your perfectionism, I’d like to encourage you to practice in a safe setting, and recruit people who will support you in your journey toward excellence—not perfection.

And no, you don’t need to spill coffee all over yourself in the process.

Want to learn more about how to be an excellent presenter? We’re here to help. Register for one of our upcoming Public Workshops!

Ralf Wolter is PowerSpeaking’s resident “technology futurist.” He enjoys combining visionary thinking with a practical, hands-on approach to using technology to shape the future of coaching and training.

END_OF_DOCUMENT_TOKEN_TO_BE_REPLACED 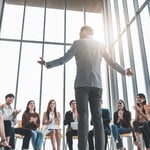 Want to Get Ahead? Learn the Fine Art of Persuasion.

Best-selling author, Harvard instructor, keynote speaker, and brand adviser, Carmine Gallo, has an interesting proposition:  that business is in sore need of employees and leaders who are masters of the ancient art of persuasion.

END_OF_DOCUMENT_TOKEN_TO_BE_REPLACED

The So-Called “Soft Skills” are the Currency of the Future

I read a recent study by tech giant IBM that came to a pretty startling conclusion:  In the next three years, approximately 120 million professionals worldwide will need to develop more effective behavioral skills and new ways of working together in order to succeed in the evolving digital age.

END_OF_DOCUMENT_TOKEN_TO_BE_REPLACED 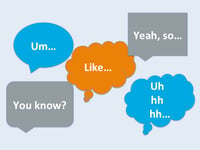 You can spend weeks crafting content and slides before a talk. Maybe you even rehearse for polish. Then what often occurs during presentations? Well, uh, actually, um…filler words happen, undermining your credibility. Simply put: if you use too many of them, it’s distracting. How can you avoid these language crutches and display more confidence? Read on to learn our tips for eliminating filler words from your talks.